Currently, the United States military uses 5G for a growing number of applications besides communications.

For example, 5G allows for augmented reality (AR) simulations, which helps the medics increase their overall readiness by allowing them to train for emergency situations that would be more costly and time consuming to recreate. According to a Department of Defense news release penned by Dr. Paul A. Young, the 5G features functions and advanced communications technologies, including flexible bandwidth allocation (ultra-narrow to extremely broad), in-network core applications, ultra-low latency, and ubiquitous connectivity for DoD military medical service components, enabling the joint medical community to sustain its long-term economic and military advantage.

Besides being costly to set up, 5G’s limitations are also costly to compensate for.

Although 5G is faster than its predecessors, it has a lower broadcasting distance. Tall buildings and trees can block 5G transmissions, meaning that more cell towers must be built to increase coverage in areas where there are too many blockages. That being said, 5G also isn’t nearly as effective at penetrating walls as it would be without dependence on indoor small cells, which are low-powered cellular base stations that increase transmission range by several feet to a few kilometers.

5G also poses a higher security risk. The expansion in the bandwidth and increased connectivity enables criminals to hack the database with more ease. The software it uses is also more vulnerable to attacks. Hence, entities using the technology must invest in infrastructure with a security operations center. They must also develop programs to educate their end user in how to safeguard themselves against such attacks.

Despite its limitations, 5G does provide the fundamental building blocks for a more powerful network.

Even while more uses for 5G are still in the ideation stage, 6G is already under development and we have yet to define the extent of what it can do for us and what that would mean for the future. What we know for certain is that in the defense sector, the United States continues to push for smaller, more portable devices, which provide more bandwidth and longer battery life. As Dr. Tarun Soni of Northrop Grumman Mission Systems expressed during the 5G Breakout session at Sea-Air-Space 2022, “efficiency equals lethality.”

Dipoles: The Simplest, Most Common Antenna

As it’s name suggests, in its basic form, a dipole antenna consists of two conductive elements, unlike a monopole antenna, which has one.

END_OF_DOCUMENT_TOKEN_TO_BE_REPLACED 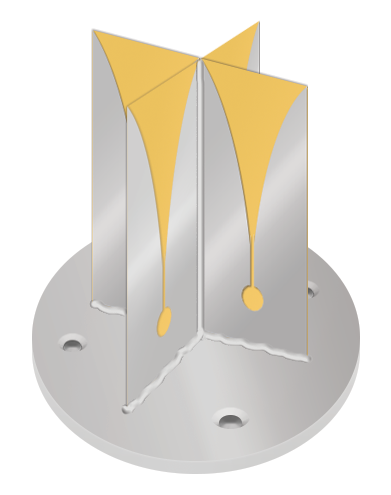 Anatomy of a Vivaldi Antenna

The Vivaldi antenna, also known as a tapered slot antenna, is a type of linear-polarized planar antenna invented by Peter Gibson in 1978…